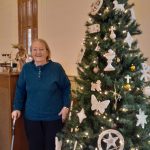 The Chrismon ornaments originated right here in Virginia at Ascension Lutheran Church in Danville.  Chrismons were developed in 1957 by a lady named Frances Spencer who was a member of Ascension Lutheran Church.  Frances wanted Christmas tree decorations to be meaningful and to help Christians remember why they celebrate Christmas.  Chrismons are Christmas decorations with Christian symbols on them.  Frances Spencer called the decorations Chrismon, which is a combination of Christ and monogram (meaning symbol).  Chrismons are made from white and gold material.  White is the 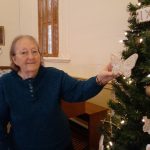 liturgical color for Christmas and symbolizes that Jesus was pure and perfect.  Gold symbolizes Jesus’ majesty and glory.  Symbols that are common Chrismons and that represent Christ include the cross, an anchor, first three letters of Jesus name in Greek, fish, alpha and omega (first & last letters of the Greek alphabet), the Chi-Rho, Star of David, Nativity Star, crown, shepherd’s crook or staff, the symbol for “Trinity”, praying hands, the scroll, dove, lamp & candle, shell, the cup or chalice, the manger, lamb, butterfly, heart, and much more.

Ruby Simmons remembers meeting at Beulah PC with other members to make Chrismons.  Each person would choose a pattern (symbol).  The pattern would be placed on a piece of white Styrofoam and then with a knife, the women would cut around the pattern.  After the symbol was cut from the Styrofoam, they would glue gold 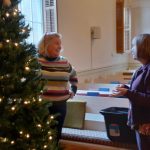 decorations such as glitter, sequins, and beads around the edge of each Chrismon.  More than forty years later, Beulah members continue to use the Chrismons made by Ruby and other church members.  Karen DeVore remembers that Mrs. Gray was the one that showed everyone how to make Chrismons.  Both Ruby and Karen remember that the Chrismons were always carefully preserved and protected between layers of tissue.  On Sunday, November 27, 2022, Beulah members once again decorated the sanctuary for Christmas.  Julia Blanchard and Wanda Evans carefully put the white lights on the tree (symbolizing Jesus, the Light of the World).  Next, the Chrismons were lovingly hung on the tree by Julia. 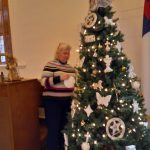 The most important aspect of the Chrismon ornaments is their ability to share Christ’s story.  Frances Spenser said that a tree was never finished until someone came to see it and have the story of Christ explained to them through the ornaments.  On Sunday, January 1, 2023, Beulah PC members gathered together to share the Christmas Story through a “Lessons & Carols” program organized by Richard Simmons, Beulah music director.

As we take the Christmas decorations down and put them into storage, let’s not forget to continue to share God’s love, joy, peace, and hope with the world each and every day!